WHAT IS SCIENTIFIC MOLDING?

Injection Molding as a Scientific Technology

For decades, the idea that specific machine control settings would directly correlate to specific part problems and their solutions seemed ingrained in the industry. However, that was wrong.

The injection molding process for plastic was developed more than 100 years ago. A dynamic growth in all processing methods occurred after World War II. As plastics achieved wider use, it was apparent that production personnel had to learn how to solve part quality and consistency problems. The method used was to determine which of the 20 or so machine controls would solve each type of part problems, e.g. dimensions, weld lines, voids, sink marks, warp, etc. But there seemed to be little or no correlation between machine control settings and most of the molded part problems.

Over the years, numerous companies and researchers set out to determine which machine controls to use to eliminate each specific part problem. An example was an Eastman Kodak research project in 1962 to establish how to control specific dimensions in their Instamatic film cartridge. In a design of experiments project, and after six months of molding and measuring, the report concluded that the dimensions were being affected by:  barrel zone temperatures, screw RPM, injection pressures, holding time, fill time, and back pressure. In the conclusion, the author states, “all of the above machine settings had an effect on part dimensions and further study would be required”.

For decades, the idea that specific machine control settings would directly correlate to specific part problems and their solutions seemed ingrained in the industry. However, that was wrong.

In early 1963, Don Paulson, a professor at the General Motors Institute, began a different approach in his research on the causes of mold part variations. The basic premise was plastic processing had to follow the same laws of physics, as all other processes, and that the molding process was simply a four-step sequence of energy inputs and removals.

Each of these molding steps would be governed by the laws of physics. First, the Laws of Heat Transfer; second, the Poiseuille fluid flow law; and third, the Equation of State for Plastic. These three equations applied to the molding process required only four measurements during each molding cycle. Those four measurements are the melt temperature, the fill time, cavity pressure, and the mold temperature.

A molding machine was then instrumented to ensure that each molding cycle could be examined to check for unintended machine or plastic variations. These instruments measured and recorded the machine timers, barrel temperatures, screw travel, screw RPM, back pressure, injection pressures, and clamp force.  In the mold, three pressure transducers and thermocouples measured the plastic pressures and the mold temperatures. They also measured fill times.

There was a total of 16 measurements recorded for each cycle. The research continued for four years. Thousands of machine cycles were run and recorded on chart paper to be individually analyzed. Test bars and plaques of various thicknesses were molded and measured. Machine adjustments were made to cause dimensional variations and cause part defects, such as: voids, sink marks, burn marks, and flash. In nearly every case, the defect could be directly attributed to one or more of the four basic plastic processing variables.

First, the research was proof that plastic processing follows the same physical laws as all other materials, and secondly, the properties and characteristics of the molded parts are determined by the four basic plastic variables.

In the past, the training of competent molding personnel has required years of experience on the production floor. This new understanding of molding as a science based technology allows personnel to learn injection molding from the plastic’s point of view and understand the actual causes of part defects. Molders must still learn machine setup, the operation of each machine control and the effects of each machine control on the plastic. The raw material must still be monitored, and the machines must be maintained, but the decisions on best control settings, best cycles and how to solve molded part problems will be science-based. Experience has shown that learning plastic processing from the plastic’s point of view is far faster and more effective than the traditional method.

For more on the subject of scientific molding read the additional articles posted on this page. 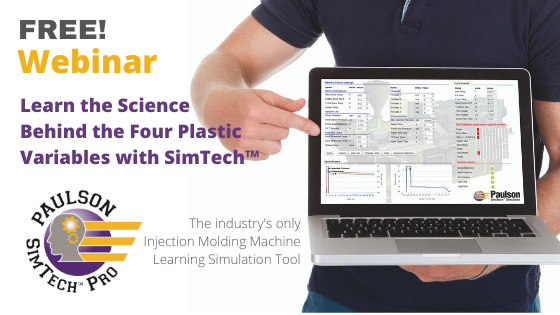 Part of a monthly series of FREE webinars: Learn the Science Behind the Four Plastic Variables with SimTech™: Understand injection molding from a scientific point of view by learning how the plastic responds to the four plastic variables. Each variable… 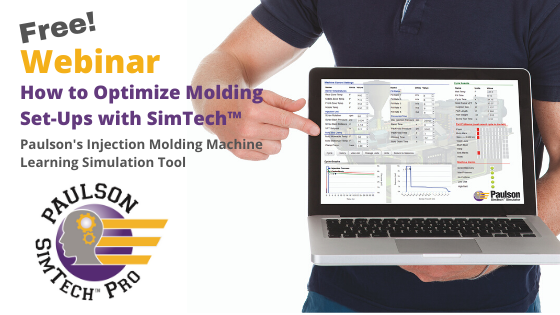 Part of a monthly series of FREE webinars: How to Optimize Molding Set-Ups with SimTech™: Process good quality parts every time with key optimization strategies and learn how optimization translates to actual dollars saved. We'll show you how. Date: July 27,… 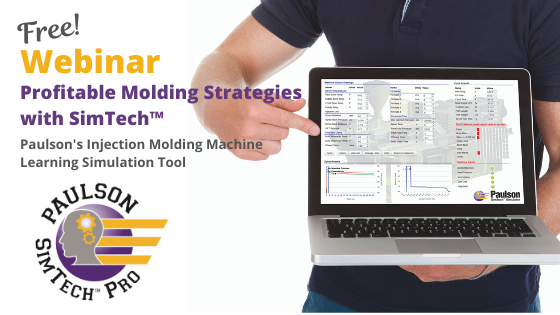 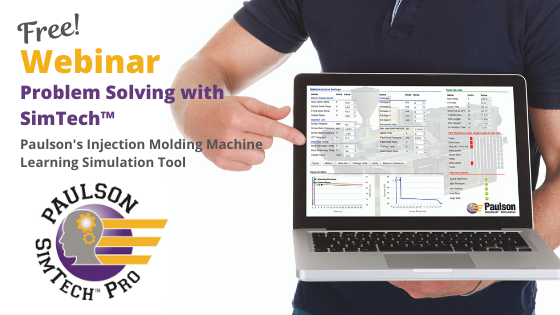 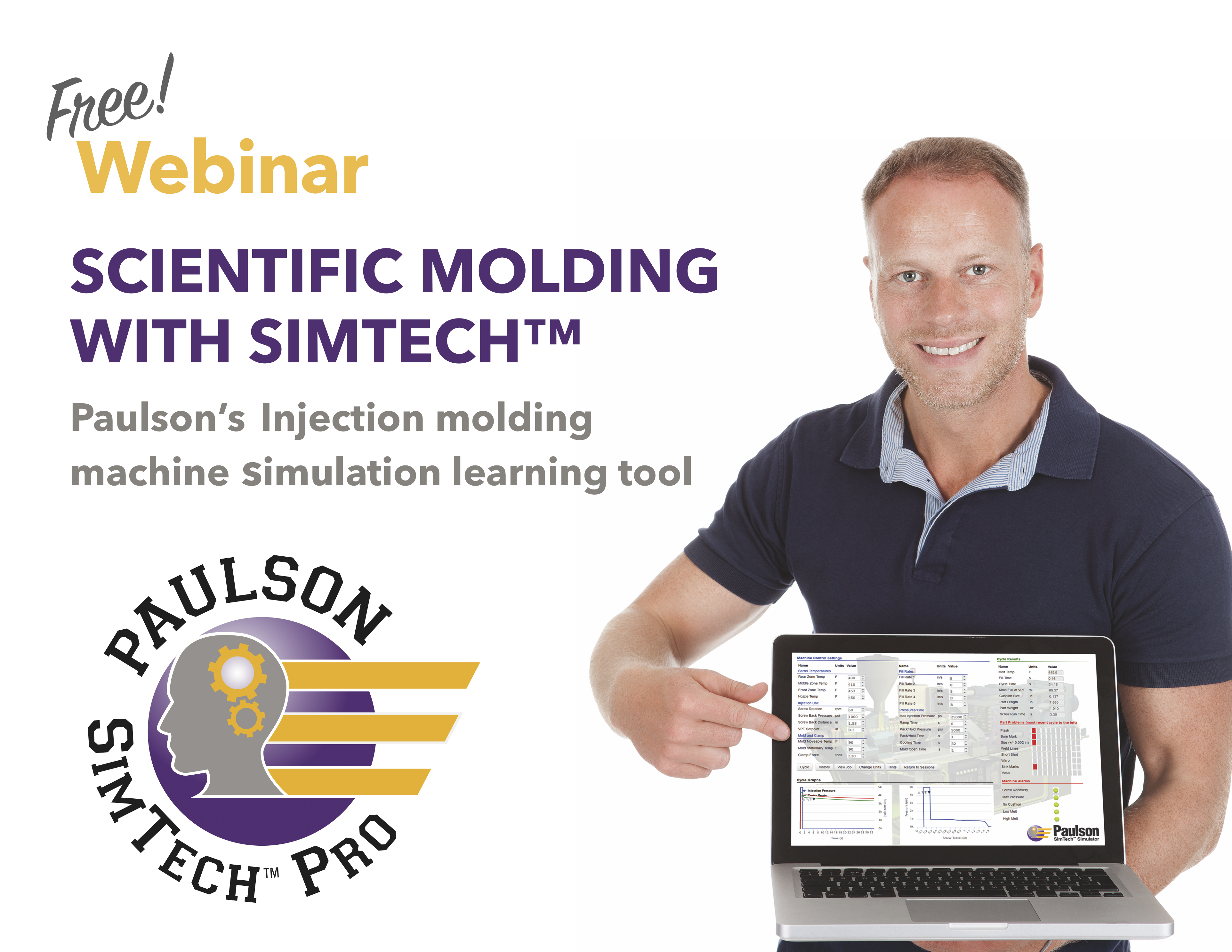 Join our FREE webinar: Scientific Molding with SimTech™: Learn the science behind molding using interactive lessons with SimTech. Date: Wednesday, April 29, 2020Time: 2pm (EST)Duration: Less than an hour Sign Me Up Scientific injection molding (SIM) is the practical application of…

By Donald C. Paulson (As published in Plastics Business Magazine)   More and more we hear the term Scientific Molding used to describe the ideal injection molding process. But what does it mean exactly? Opinions vary widely. Allow me, as…

This is the third post relating to Paulson injection molding courses and the application of Scientific Molding Packing pressure and gate seal- If you’ve followed our sequence of machine control settings, you’ve learned about fill rate control and the velocity…

Very informative. You will understand how material affects molding!

“Paulson has built confidence, a sense of accomplishment & pride in our workers, something they can take to the floor and apply!”