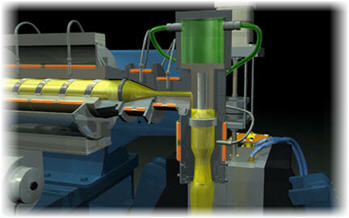 With the release of Paulson newest training program, Extrusion Blow Molding Technology, we thought it would be appropriate to write some blog posts on extrusion blow molding and the common processing problems that blow molders experience day-to-day.

One thing that is inevitable for any plastics processor is that you will face production problems every day. How fast those problems get solved and how efficient the solution is in terms of cycle time are the main factors in determining overall plant productivity and profit.

When solving problems that occur in the extrusion blow molding process, you should stick to an analytical, scientific-based method. The reason for this is so that the primary problem can be solved, then in the course of fixing that problem, you will have a good understanding of any secondary or new problems based on what you’ve done already.

Let’s apply this analysis to the problem of parison curl. For parison curl we would say the problem is caused by an uneven plastic flow rate around the circumference of the die opening.

So what are the possible causes for this?

Well, it could be that the gap dimension is not the same around the circumference of the die head. That would be an adjustment ring problem. It could also be that the default viscosity of the plastic flowing out of the die 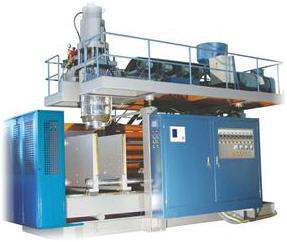 head may not be the same all around. That would be a temperature problem. There could also be a difference in the pressure on the plastic entering the gap. A pressure difference within the die head could be caused by the plastic having to flow around the mandrel of an axial die or pressure variation caused by choking either fixed or adjustable.

In fact it is even possible that the mandrel is bending from uneven plastic pressures or there could be an assembly problem. These are all the possible causes of parison curl based on analysis of four primary plastic variables.

Knowing that the problem is most likely caused by either an incorrect die ring adjustment or a variation in the parison temperature, start by measuring temperatures.

It is very important that an accurate and sensitive temperature measuring instrument be used. Thermocouple or infrared instruments are the most common. Measure the plastic temperature all around the parison circumference and look for differences. Record the measurements and their location.

With the problem of parison curl it is tempting to start right away moving the adjustment ring to stop the curl. But if you do that and the problem is the plastic temperature, you will be chasing the problem continuously.

Here’s an excerpt of Lesson #5 from our brand new Extrusion Blow Molding Program.

Put Your Molding Skills to the Test!

Are you a hot-shot molder? Find out in Paulson's series of monthly injection molding challenges…

Back To Basics – The Job of the Injection Molding Machine Operator