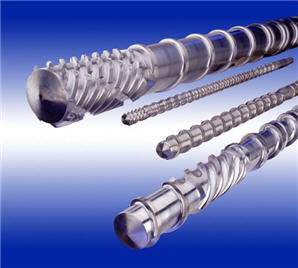 This is a short extrusion training tutorial on the basics of how plastic is melted in the single screw extruder. Let’s talk about the compression zone.

Most of the melting of the raw material from solid plastic particles to plastic melt occurs in the extruder screw compression zone. The goal of the compression zone is to completely melt the solid bed of plastic and also to help mix the melt. This melting and mixing is accomplished through heat, compression and shear. Plastic pressure is also increased in this zone.

In the compression zone of the extruder, the plastic is in contact with the heated inner wall of the extruder barrel. The high surface temperature continues to melt the plastic that is in contact with the barrel wall. A thin layer of molten plastic adheres to the inner barrel wall. The rotating screw shears the plastic at the barrel wall which generates heat and accelerates the melting process. If we follow this plastic as it travels down the compression zone, we see that the layer adhering to the barrel thickens, until this thickness exceeds the clearance between the screw flight and the barrel wall. The screw flight, while moving forward, scrapes off some of the melt, which then accumulates at the front or pushing face of the flight.

Raising the barrel temperature on the extruder can either increase or decrease the melting rate, depending on how much the viscosity changes. A decrease in the overall melting rate is more likely when extruding amorphous type plastics because their viscosity drops quickly when their temperature is raised, so less shear heating occurs. The viscosity of semi-crystalline plastics is less affected by an increase in compression zone temperature, so shear heating continues at a high rate.

If you have some extrusion training topics that you would like covered here, just leave your comments below.

Plastic cooling rate is one of the four basic plastic variables. Establishing accurate control is…

Plastic pressure is one of the four basic plastic variables. Establishing accurate control is vital…