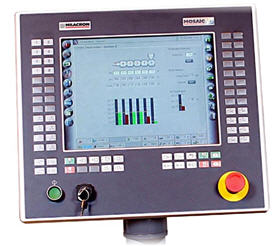 All modern injection molding machines have fill rate controls on the control panel. The molder can use these fill rate controls to vary the plastic flow rate. Because flow rate is one of the 4 basic variables in molding it has a major effect on the directional properties and surface finish properties of the molded parts. By controlling the fill rate, the molder can solve molded part defects like jetting and burn marks. Fill rate can also be used to reduce the severity of weldlines. 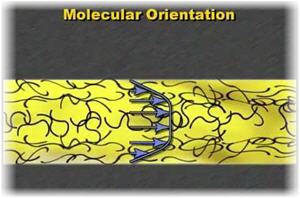 When plastic flows, the molecules orient, meaning they line up in the direction of flow. This is called molecular orientation . The faster they flow, the more they line up (orient). If the polymer molecules remain oriented, the molded part will be stronger in the direction of plastic flow but weaker in the transverse direction. If the parts crack, the cracks will form between the oriented molecules. The flow rate also affects the surface of the plastic part. A molded part defect called crazing shows up as tiny cracks. Crazing can show up days, weeks or even months after the part is molded. Crazing is caused by highly oriented plastic molecules trapped near the surface of the part.

The problem of jetting (which is also sometimes called “worm tracks”) appears as a line in the plastic part when the injected plastic fails to form a flow front. The plastic reaches the gate then shoots straight through the cavity rather than flowing smoothly with a well formed flow front. The solution to a jetting problem is to reduce the fill rate just as the plastic reaches the gate. Once a small flow front has formed the molder can increase the fill rate. 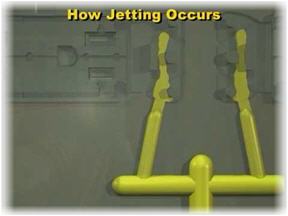 Burn marks are created when air inside the mold cavities cannot escape fast enough. The air gets compressed so much that auto-ignition occurs. To fix burn marks using flow rate, the molder should slow 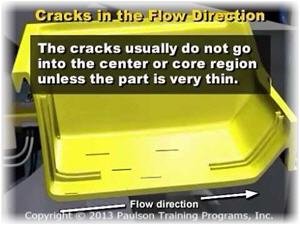 down the final fill speed. In severe burn mark cases, it may be necessary to modify the venting in the mold. But the molder should always try the simpler solution of reducing final fill rate before taking the time (and expense) of modifying the tool.

As a general rule, the molder should fill the mold quickly to save cycle time. It’s a good rule up to the point where the fill rate is so fast that it starts to cause problems.

When any of the defects discussed here occur, the molder who understands the scientific molding principles behind the injection molding process will analyze the problems on the basis of the 4 variables and then decide which machine controls need to be adjusted to solve the problems.

Webinar: Step One of the Molding Cycle, Heating the Plastic

Understanding the four steps of the molding cycle is key, and in this webinar, our…

Webinar: Let’s Talk the Four Steps of the Molding Cycle

How do you increase productivity and reduce part problems? Understanding the four steps of the…