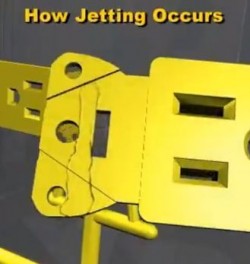 While the main focus of our “From The Plastics Point of View” blog posts have been related to problems directly caused by the 4 primary processing variables – heat, pressure, flow and cooling, there are a few injection molded part problems that are only indirectly related to these 4 plastic variables. One of these part defects is called “jetting”.

Jetting is both an appearance and a structural defect in an injection molded part. It is also called a “worm track” which is a descriptive term for what jetting actually looks like in the molded part. It is caused when the first flow of plastic entering the cavity jets through like a stream of water without forming a proper flow front. The plastic flow front then forms at the gate (the way it should have originally) and the plastic fills the cavity. However, the jet of plastic that initially entered the injection mold cavity has cooled slightly by the time the flow front fills around it. The jet of plastic never gets the chance to become part of the rest of the cooling plastic and therefore the jet of plastic shows up as a surface defect.

Jetting is not a very common injection molding problem anymore.   Proper gate design and location will easily eliminate the problem.  One of the characteristics of plastics is that plastic exiting the gate of an injection mold typically expands to about twice the thickness of the gate.  So if the gate is made at least one half the thickness of the cavity, the plastic will touch both sides of the cavity wall and the jet will be stopped.

In plastic part designs where the gate must be kept small, the mold designer will locate the gate so that as soon as the plastic leaves the gate it hits an obstruction such a rib, a boss or the opposite wall of the cavity.  However if the mold designer has made a mistake in the design the phase, the molder can still solve the jetting problem. On an injection molding machine with programmed injection, the molder will start to fill slowly until plastic has built up a small flow front in the cavity.  This will block any tendency for the plastic to form a jet during injection.  Once the flow front is formed (and therefore any jetting avoided), the molder can continue mold filling at the normal rate.  Usually, the slow initial plastic fill speed will cause a very small, if any, increase in cycle time.

By far, the #1 problem plastics manufacturers tell us they have (particularly injection molders, but…

The Magic of Injection Molding Training On Profits

"Sales are off, machines are idle, I’ve let people go, and you think I should…