We’re going back to basics in this blog post. Identifying your injection molded part defects is the first line of defense against wasting valuable molding machine time.

Speaking the same “language” on the production floor, streamlines communications between employees and between shifts.

The first step to solving injection molded part problems is to identify the problem correctly. The key to correctly identifying part defects  and communicating about them with co-workers is using the same terminology. Here are some common part problems and part defects that can occur during production. We have used the most common terminology generally used in the molding industry to identify the defects. For a complete description of molded part problems and how to solve them, you can refer to our Injection Molded Part Problems and Solutions training course. 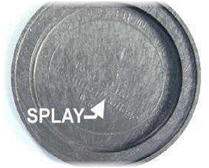 Splay:  This defect looks like small silvery streaks on the plastic part’s surface. It is caused by moisture in the plastic raw material that becomes steam during molding. 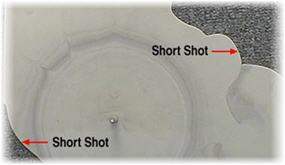 Short Shots: Short shots are parts where the plastic did not completely fill out the cavity.

Sink Marks: Sink marks are depressions on the surface of the part. They usually occur in the thicker sections of the part.

Flash: Flash is a thin layer of plastic that flows beyond the parting line of the mold.  Besides being a part defect, flash can also permanently damage the mold and mold parting line.

Weldlines: This is a weldline (also called a knitline).  It looks like a scratch on the surface of the part. It is formed when two plastic flow fronts rejoin in the cavity. 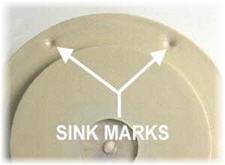 Worm Tracks: A jet or worm track is a surface appearance defect. Jetting occurs during mold filling when a stream

of plastic first shoots through the gate and doesn’t form a flow front. Jetting is really a mold design problem, but can sometimes be solved by adjusting the plastic flow rate.

Color Streaks and Discoloration: Here is a part that has color streaks. Parts that are not uniform in color indicate that something is changing in the molding job. Parts can change color because of defective colorant, a change in the amount of colorant, overheated plastic, or a change in the virgin-to-regrind ratio.

Burn Marks: Burn marks occur when air, trapped in a cavity, is compressed so much that it ignites. Burn marks typically occur in the last areas of the cavity to fill. 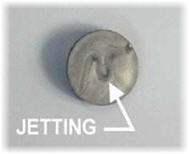 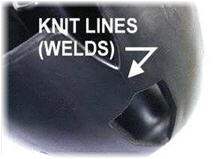 ormation or Warpage: Here is an example of a warped plastic part. Warp is caused by uneven part cooling.  Parts can warp either immediately as the parts are ejected or take minutes or even hours to warp.

Ejector Marks: Ejector marks. Sometimes undesirable marks are left on the part by the ejection system.  If the ejector rods are set up with too much force or if the part is ejected too soon, marks may be left on the finished part. 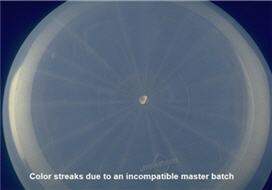 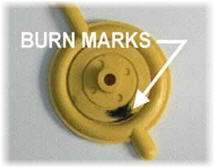 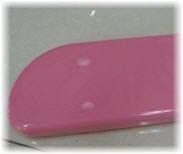 To reduce cycle time, molded parts should be ejected as soon as they are rigid enough to hold their shape out of the mold.  This means that part cooling continues after the parts are ejected.  Plastic parts can warp from uneven cooling in the mold or out of the mold. In general, parts try to warp towards the warmer side. All parts should be set down to complete their cooling the same way.

When molded parts are scheduled for post-production operations like painting, metallizing or decorating, they should not be touched with bare hands.  The reason is that oils from the skin will affect the adhesion of the any coating. Likewise, optical and medical parts must not be touched for reasons of appearance and cleanliness. Operators should use gloves to handle these types of parts.

Working in a quaint New England town close to the ocean has its advantages. But…

Who Should Be Trained in Your Plastics Manufacturing Plant?

It’s a no brainer. You get to see for yourself how easy and simple it is to learn injection molding, extrusion, blow molding or thermoforming. A great way to try before you buy!