(As published in Plastics News.) 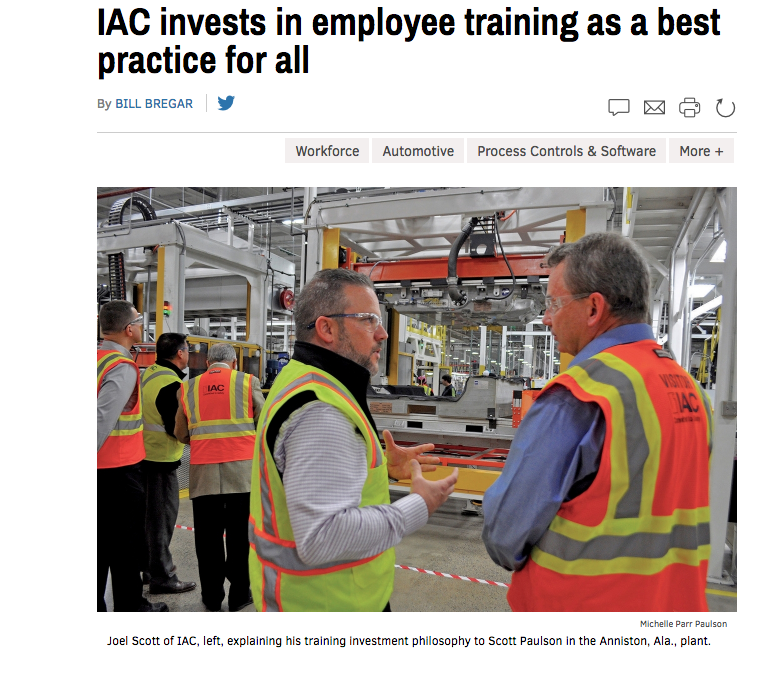 This month, Best Practices takes you to the world of employee training — at International Automotive Components’ North American Division, where its big plastics operation is adopting Paulson Training Programs Inc.

Paulson set up four levels of testing, and it is for more than just new employees. Scott said there’s a curriculum designed for the total plastics business at all 14 plants in North America.

“Every single employee in every single plant has to go through some form of training,” from janitor to management, Scott said. For example, he said “a janitor’s training was the same as the president’s,” meaning that both are at Level One.

Also, anyone who is interested can take a higher-level test.

IAC’s cockpit and overhead systems molds and assembles interior plastic parts like doors, instrument panels, center consoles and other trim pieces. The overhead is the headliner.

Scott was promoted to vice president of operational excellence from his original post of senior director of management, where he led the decision to go all-in on Paulson. He came to IAC in late 2014.

“My sole purpose before in this organization was developing a strategy of taking our injection molding from average to excellent. It ended up being a three-year strategy and part of that was training,” he said.

Scott calls it the “brain tissue” process … as in measuring and working to improve.

The overarching plan was to look at technology, machinery and tooling. The condition of the asset base, the “hard technology,” how do employees troubleshoot, maintain and repair the machinery. Another area, he said, was advancing technology, such as core-back molding.

The knowledge-gap discussion was in a separate group.

Scott said people had some fun with it, as the company tracked test scores. They competed. It helped get buy-in from top management — and take it from Best Practices, if you don’t get this, it’s so much harder. And if you don’t plan sufficiently, it can be a worse-case scenario, yes, training a bunch of Patrick Stars from “SpongeBob.”

The company approved spending thousands of dollars on Paulson. In April 2015, IAC bought Paulson’s complete injection molding library, with more than 100 hours of training content for the 14 plants in the United States, Canada and Mexico. Training included both English and Spanish.

Scott likes the Paulson training products. It allows you to define training, according to what groups of people need to know and is easy to customize, he said.

Best Practices asks: Have you heard about the skilled worker shortage? Heard about the need for training? Heard that too many companies don’t do training — what’s the ROI, they ask? What’s the payback?

Well, although Best Practices doesn’t run a plastics company, it seems pretty obvious that a manufacturer that doesn’t train its employees is making a big mistake, struggling through quality problems and high turnover.

Want some return on investment? Scott is the ROI King of Training.

Throughout North America, after training, the company saved 4,288 employee hours a week and 3,024 press hours a week. Big-time savings that add up to millions of dollars a year. The effort also has helped reduce cycle times.

Together this has boosted capacity utilization, Scott said. So training does tie back into the macro-picture company improvement plan.

Ted Chrzanowski, vice president of sales at Paulson Training, went to all 14 factories. Scott Paulson, director of business and product development, went to many of them as well, and IAC’s Scott said that was important. “I wanted to make sure Paulson understood our commitment and our approach, and partnered with us,” he said. Employees could ask him questions directly.

Scott is a believer in face-to-face communications. Mass “virtual meetings” on the web or Skype look good in theory. But everybody’s multitasking … (Excuse me while Best Practices checks its Facebook page) … Oh yes:

Scott said, “I made sure Paulson knew up front, my expectation is they were going to go every deployment with me.”

Each plant uses Paulson as part of its on-boarding initiatives for new employees. But IAC’s use of Paulson Training goes far beyond that — and Scott is thinking creatively about how to use the information.

IAC can test a technical person whom the company is looking to hire and can compare the results to other people in those jobs already. The Paulson data gives a lot of information. You can also test new hires in jobs and then test them again after the training and use that to improve the hiring process, according to Scott.

“We can bring this potential new hire to this level and get this skill level,” Scott said.

So his message is, yes ROI measurement, yes training. But it’s better as part of a comprehensive manufacturing approach.

“The ROI is this massive strategy that we’re deploying. Part of this strategy is training,” Scott said.

It’s a no brainer. You get to see for yourself how easy and simple it is to learn injection molding, extrusion, blow molding or thermoforming. A great way to try before you buy!